Why we should all be a bit more supportive of each other in our shared efforts to fight the climate crisis.

We all have our days that we lose hope in humankind’s ability to solve the climate crisis. Climate change is such a big challenge that it requires the whole system to change. It makes it even more complex and difficult when you consider that there are 7.7 billion people in this system. And even though there is extreme inequality amongst them, many are reaping the benefits of it in such a way that it might seem unlikely they’ll ever change.

Climate change is not a technological problem, it’s a human problem. It’s a problem of people having lost connection with each other and their living environment. It’s a problem created by our behaviour and fueled by our desire to fit into the system and to belong to something — a religion, a movement, a sports team — anything that gives us an identity. Because in the end, humans are social beings and our need to connect is as fundamental as our need for food and water. We feel a constant longing for interaction and a need to be part of something bigger. And our behaviour is strongly influenced by these feelings.

So what does this mean in terms of taking climate action?

It simply means that we should be more supportive of each other’s efforts in fighting the climate crisis. We know that climate change is happening and the urgency of the situation but the constant influx of bad climate news and can be very demoralizing. Even more so, receiving negative feedback from others about the things we’re trying to change and being confronted on how you should do better doesn’t help the case either. If we want to shift the focus from crisis and negativity towards action, we rather have to create a positive mindset.

Emotions can be a strong motivator for changing behaviour and social interactions can therefore be very powerful. Our mirror neurons allow us to match each other’s emotions unconsciously and immediately. So what if we instead of judging each other, we would cheer for each other? Because every little action matters— especially when you consider that you might affect people around you and who knows, maybe they’ll even ‘mirror’ you. Positivity, interest and enthusiasm can increase our motivation, which increases the chance that we will act.

So why don’t we start with being positive about the actions we are taking and motivate and encourage each other?

In the summer of 2019, we (the Climate-KIC Alumni Community) set-up the Motivation Station at Sziget Festival in Budapest. The goal of the Station was to empower participants to act by reminding them that they can make a difference and to shift the focus from climate crisis towards climate action by creating a positive mindset. At Sziget, we talked to a few hundred people throughout the festival and I must say that I was very surprised by some of the conversations I had. 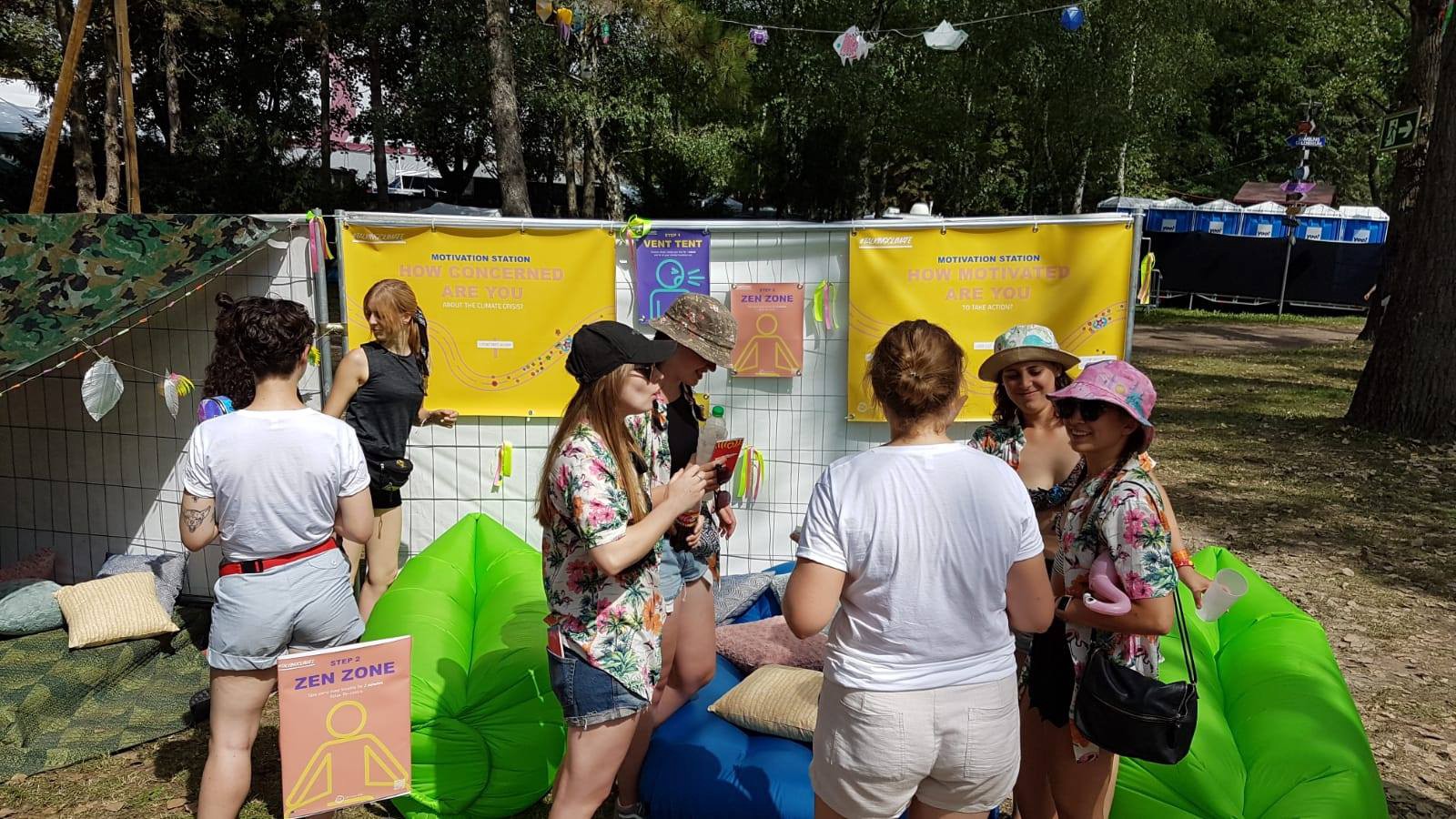 How does it work?
The participants are first asked How concerned are you about the climate crisis? and they’ll rate this on the scale of:
I rarely think about it — Sometimes I worry — I lose sleep over it

After which there are 3 steps towards motivation.

Step 1: The Vent Tent. Take one minute in the vent tent to literally scream and shout and let all your climate frustration out.

Step 3: Good News Generator. Spin the wheel and receive a piece of good news about climate action. We may be in a crisis but great things are happening too!

The participants are asked How motivated are you to take action? and they’ll rate this on the scale of:
Baby steps, maybe — Okay, let’s get to work — I’m ready to change the world!

The last part of the Motivation Station is an invitation to have a talk with participants about what they’re feeling and what they think about taking action themselves.

My takeaways
The most striking for me that everybody said that they were concerned about the climate crisis, most were even very concerned. Imagine that this was at a festival, where people are coming to have fun and escape reality, and generally don’t want to be confronted with topics such as climate change.

Even though the Motivation Station only takes about 5–10 minutes, we ended up hugging a lot of people, and some even cried. The most important part of the Station is the conversation we have after the 3 steps. We tried to have an open and honest talk and gave examples of things we’re doing ourselves and things were struggling with. By showing our imperfections as part of people in a climate movement, and communicate that it’s ok to not do everything right, we created a safe space for people to talk about their emotions and behaviour. I think that because of this participants were able to better relate with us made them feel they could be part of the solution.

This positive mindset and emotional connection created opened the conversation about what action they would like to take, and for encouraging them to do this just by showing support. No matter how and insignificant the action might seem, it is important to motivate people by giving them confirmation that their actions matter, and that all actions we take collectively could change the world. And that by encouraging them that by showing others and having similar conversations with them, their actions could generate even more impact. Because only if we talk about our actions, share our experiences, and show that we care, we can create an environment where people feel supported in their efforts in fighting climate change.

And ultimately, the best way for us to tackle the climate crisis might be by creating an alternative, more social system that is based on human connection and sense of belonging, of community.

Because having conversations about climate change in our daily...

#TalkingClimate Handbook: How to have conversations about climate change
High Dreams

To visualise our dreams we put them down on...

After an intense but exciting past year, it’s nice...

What would systems look like if, instead of competing,...

Having spent an intense but amazing eight months with...

Starting Point
From Footprint to Action

How music festivals can engage in education for sustainable...

It has been a busy year for Alumni Community...